When auctioneer Lynn Lee’s gavel fell for the last time on November 9, 2019, in Newmarket Hall, 35 juniors from a dozen states had secured their place in the 2022 Pot O’Gold Production Contest with a purchase from this year’s Pot O’Gold Sale. The sale was held in conjunction with other events at The All American Jersey Show and Sale in Louisville, Ky. These juniors are now able to compete for prizes in the contest and recoup a portion of the purchase price of their animals.

But this program is so much more than a production contest. It is also chance for juniors to purchase premium Registered Jersey genetics for reasonable prices. As always, Jersey breeders didn’t hold back, but rather consigned from the top of their herds to give young people opportunity to breed on quality foundation stock.

Henry Dizek of Hadley, Mass., purchased the high seller, JX Ahlem Brothers Stormcloud 41090 {5}, for $4,300. The third oldest heifer of the offering, she is sired by JX Ahlem Boudreaux Stormcloud {4}-ET, GJPI +167, and due to sexed Oaklane Dazzler Disco 2127-ET, GJPI +174, in early May. No stranger to the Pot O’Gold program, Dizek has placed in the production contest several times before. Like his other purchases, “Stormcloud 41090 {5}” will be milked with the herd at Mapleline Farm, owned and operated by his grandfather John Kokoski, and the rest of his family. 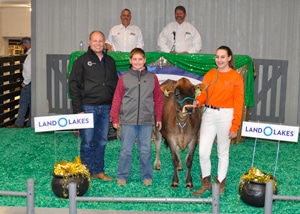 JX Primus Enzo Chanel 24267 {4}-ET was the second high seller, purchased by Robert Graves, center, for $4,100. She was consigned by Jerseyland Sires, represented by Tyler Boyd, left. At the halter is Allison Graves and in the box are Lavan and Lee.

Bryson J. Josi, Tillamook, Ore., purchased the third-high seller, JX Bohnerts Got Maid Selena {6}, for $4,000. The daughter of JX Sunset Canyon Got Maid {5}-ET, GJPI +212, sold due to sexed JX River Valley Chief {6}-ET, GJPI +181, in mid-June. She will join the milking string at Wilsonview Dairy, operated by his family in Tillamook.

Ohio junior Elaina Hodge of Norwich placed the final bid of $3,850 to bring home the fourth-high seller, Dutch Hollow Craze Myria. Selling two days shy of her first birthday, the “Craze” daughter has GPTAs of +762M, +48F and +33P and is +148 for GJPI.

There are no upcoming events.